When the Lights Go Out

Memoir of a Missionary to Somalia

In 1960, Ruth Myors left Australia to work as a midwife with the Somali people. For over two decades, she worked in a hospital in Somalia, a village in Ethiopia and in radio ministry in Kenya. During this time, government decisions, coups, communist takeovers, natural disasters, sudden deaths and other misfortunes disrupted plans and brought about unexpected changes in Ruth’s life.
In ‘When the Lights Go Out’, Ruth describes how these experiences have shaped her and shown her that God is faithful, and that even during the darkest periods, his light shows the way ahead.

Ruth Myors returned permanently to Australia in 1983 and is now retired and lives on the Central Coast of New South Wales. After completing an Honours Degree in Psychology at Newcastle University, she, together with Kath Donovan, established the Christian Synergy Centre, set up as a ministry to missionary candidates, returnees and other Christian workers..

When the Lights go out Sample chapter

6 reviews for When the Lights Go Out 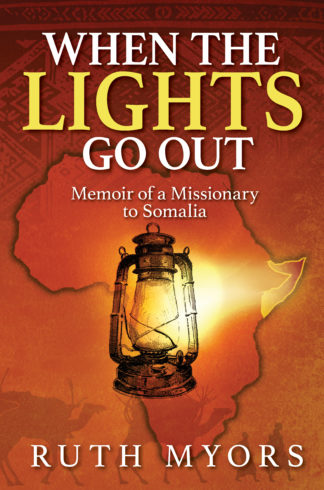