Report of Rosendo Salvado to Propaganda Fide in 1900

Translated and edited by: Stefano Girola

This book presents for the first time the English translation of the last report written by Bishop Rosendo Salvado for the Vatican Congregation of Propaganda Fide.

In January 1900, Salvado was in Rome celebrating the golden jubilee of his episcopal consecration, when the prefect of Propaganda Fide, Cardinal Miecislao Ledochowski, asked him to report on the current state of the New Norcia Mission.

In April of the same year, Salvado presented to the Roman authorities a frank account of the Mission some fifty-four years after its beginnings, highlighting New Norcia’s achievements, the obstacles that the Benedictine original missionary goals had encountered and the future challenges for the evangelisation and education of the Noongar peoples.

Written a few months before his death on 29 December 1900, this report is Salvado’s final and detailed assessment of his missionary experience in Western Australia and therefore an invaluable primary source for those interested in Church and Indigenous relationships in nineteenth century Colonial Australia. Readers with a passion for music history will find in this document fascinating information on the beginnings of the brass and string bands at New Norcia and also on Rosendo Salvado’s activity as a composer.

Offering fresh accounts of the legendary stories of the Indigenous women telegraphists and the cricket team The Invincibles, the 1900 report confirms that until the end of his life Salvado tried to challenge the negative attitudes towards Indigenous Australians widespread in Colonial Australia.

Salvado’s passionate defence of the skills and potentialities of the Noongar people is significant also because it was uttered at the time of the Australian Federation, characterised by lack of attention to the original inhabitants of the land, the spread of eugenics and social Darwinism.

Stefano Girola was born in Milan and now lives in Brisbane. In 2007, he was awarded a doctorate in Studies in Religion from the University of Queensland for a thesis on ‘The policies and attitudes of the Catholic Church with regard to Australia’s Indigenous peoples, 1885-1967’. Stefano has published extensively on Church/Indigenous relationships and on the history of Italian migration to Australia. He is an Honorary Fellow at the ACU School of Theology (Brisbane) and has a long experience as a History teacher and lecturer in Italy, Australia and Papua New Guinea. Recipient of the Abbot Placid Spearritt Memorial Scholarship (2012) and of a Western Australian History Foundation grant (2014), in 2015 his Report of Rosendo Salvado to Propaganda Fide in 1883 was published by Morning Star Publishing. 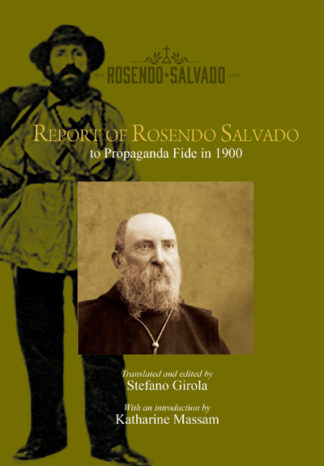 You're viewing: Report of Rosendo Salvado to Propaganda Fide in 1900 $20.95
Add to basket