In this book, fourteen women religious tell their personal stories of the dramatic changes they experienced as a result of the Second Vatican Council. What they describe is radical renewal. Their stories chart journeys that took them from school classrooms to the wider world. Variously they went to universities, practiced canon law, became feminist theologians and biblical scholars, and worked with the marginalised and asylum seekers. The sisters contribution to the educational and cultural life of Australia has been largely anonymous and its significance understated. Within twenty years few religious orders will survive in Australia in their current form. This book is a timely record of the experiences of remarkable women. Aimed primarily at the general reader, it also provides material of value to the academic scholar and researcher.

‘This book celebrates the successes, struggles and achievements of nuns in Australia, who created new ways to live and work and care for one another.’ – Wendy Poussard, Arena magazine

Be the first to review “Perfect Charity” Cancel reply 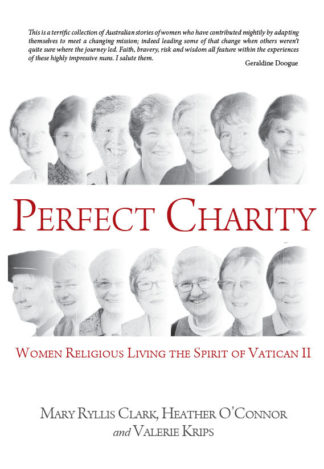