Life and death in Antarctica

The South Pole and the Spirit

There’s nothing more likely to concentrate one’s mind on survival than to be in a disabled transport aircraft, almost out of fuel, the cabin depressurised and the landing gear stuck. Especially when it happens at 80˚South above a vast, chill white desert that is Antarctica.Such an experience focused the author’s mind on those life and death events from which some people walk away unscathed, while for others an unforgiving Antarctic is their tomb.In Antarctica, as Father Michael Smith SJ reflects for the author, it is not hard to see God at work in the beauty of creation – in the mountain ranges, in the ice sheet, in the limitless blue sky, in the vastness of the continent, in the seals, in the penguins. Hundreds, if not thousands of people visit Antarctica each year in pursuit of science, exploration or carrying a tourist ticket. To their homes they return safely bearing memories of an awesome white continent. Life and Death in Antarctica is the other side of that story – a gripping account of people since the days of the earliest explorers, who have had to summon their faith in a moment when survival hung in the balance.

NB The interior of this book contains colour images and delivery may take up to six weeks.

David Burke OAM, a former journalist with the Melbourne Herald Sun and the Sydney Morning Herald, has made six visits to Antarctica and written four books on the subject: Monday At McMurdo; Moments of Terror: The Story of Antarctic Aviation; Voyage To The End Of The World: With Tales From The Great Ice Barrier; and, Body at the Melbourne Club. He and the late Dr P. G. Law were the first (and so far, only) Australians to make a direct flight from Australia to the South Pole when they were members of a long-range US Navy crossing of the bottom of the world. He believes he was the first Australian to have served at Mass in Antarctica, when based at McMurdo Sound; from there he was also the first person to make a phone call to Australia from Antarctica. David lives at Kiama on the South Coast of New South Wales. This is his 26th book. 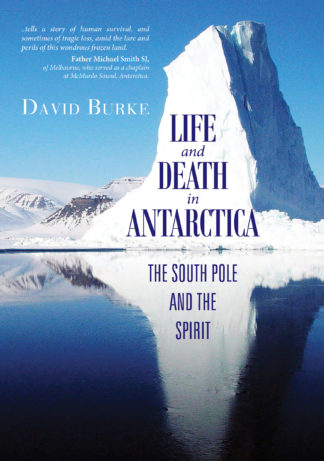 You're viewing: Life and death in Antarctica $31.95
Add to basket