Six Steps on the Path of Discipleship

by: Andreas Loewe and Katherine Firth

Join the Dean of Melbourne, Dr Andreas Loewe, and academic and poet Dr Katherine Firth, for six weekly reflections as we journey through what it means to be faithful followers of Jesus today. Dietrich Bonhoeffer is a theologian for our times: who worked across the barriers of race, denomination and language. For his role in heading an underground seminary, and his work with the resistance against the Nazi regime, he was imprisoned, interned in concentration camps and executed. Bonhoeffer’s inspiring writings invite us to ask about what discipleship really means, and what it is to live out our faith. In 2020, it will be 75 years since Bonhoeffer was martyred.
These reflections, which were first delivered as Dean Andreas’ Lent Addresses in 2019, draw on the Gospel of Luke and Bonhoeffer’s The Cost of Discipleship. Dr Katherine Firth has written a compelling new biography of Bonhoeffer, first presented at St James’ King Street Sydney, and her translations of the poems and prayers bring out the spirituality, the politics and the craft of Bonhoeffer’s works.

The Very Revd Dr Andreas Loewe is Dean of St Paul’s Cathedral Melbourne. He is a Fellow of the Royal Historical Society, and an expert on Protestant German History. He has previously published on Bach, Luther and the Reformation for academic, church and public audiences.
Dr Katherine Firth is a Lecturer at La Trobe University. An expert on translation, literature and music, she is also an award-winning poet and educator. She has previously written on Bach, Luther and Second World War  poetry for academic, church and public audiences. Both authors are fluent in German. They have previously worked together on a number of similar projects about Martin Luther and J.S. Bach for academic and general audiences.

Review from The Melbourne Anglican May 2020

2 reviews for Journeying with Bonhoeffer 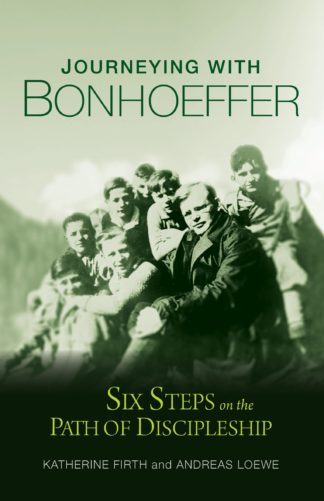 You're viewing: Journeying with Bonhoeffer $21.95
Add to basket