How the idolisation of work sustains this deadly lie

“Hard work never killed anybody” is a mantra repeated by everyone from prime ministers to workers, but this national belief contributes to injury and death in the workplace every day. In his ministry to bereaved families and injured workers John Bottomley has noted how the ideology of hard work has been exaggerated to the point of becoming an idolatry. This book confronts that idolatry with Bottomley’s long experience, personal stories, and the insights of scripture. Using Walter Brueggemann’s “prophetic imagination”, and the Australian indigenous experience of “deep listening”, the book offers an alternative vision of “companioning pastoral care”.

Senator Doug Cameron launched John Bottomley’s Hard Work Never Killed Anybody last week, and described the book thus:
“John is to be congratulated on raising and analysing some of the most complex issues arising from workplace deaths.”
“The issues raised in the book lay down a challenge to society in general about coming to grips with the impact of economic rationalism, the role of work and society, and the need for improved health and safety.” 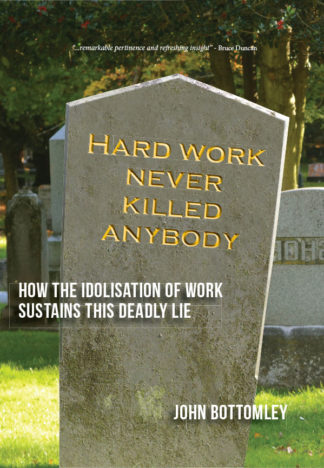 You're viewing: Hard work never killed anybody $31.95
Add to basket