Reclaiming ministries for women and men

Ministry is at the heart of churches but since the 1950s it has been a field of vigorous debate.

Gateway to Renewal is John N. Collins’ fifth book on the leading issues and builds from his groundbreaking research into ancient Greek terminology for ministry. Strangely, this area remains widely misunderstood at administrative and even scholarly levels of church life. Collins exposes the dynamics at play in this damaging scenario where the impact falls not only upon those commissioned to traditional ministries but also upon those who are disbarred from commission – principally women.

Collins takes up basic and timeless questions: What is the specific nature of ordained ministry today? What should it be? Have the ‘ordained’ more than once misunderstood and misused their ‘power and authority’? In the case of attempts to establish a modern diaconate, Collins provides a disturbing critique of how a key motivator for this development rests on a misunderstanding of the very first Christian pastoral initiative. He is also critical of the priority currently given in pre-Reformation churches to a sacerdotal character in priestly ministry. This occurs at the expense of its presbyteral character as projected by the Second Vatican Council, and obscures the centrality of the Ministry of the Word.

With their critical edge and pressing claims, these studies offer community leaders and pew-sitters alike incentives to reassess their priorities and to step out together towards renewal.

John N. Collins studied at the Biblical Institute in Rome and the Ecole Biblique in Jerusalem on the eve of the Second Vatican Council. His University of London PhD of 1976 was awarded a Tantur Fellowship in Israel for further research into ministry (diakonia). Before retirement, he taught history and theology of ministry at Yarra Theological Union in Melbourne and has been a guest speaker at theological faculties in Germany, Scandinavia and Britain. John is married to Carolyn – both their families going back to Melbourne of the 1850s – with a novelist daughter, a musician son, and three grandchildren.

From the book launch

Dr Claire Renkin who heads the Department of Christian Thought and History at the Yarra Theological Union at the University of Divinity in Victoria gave an address to launch Dr Collins’ book. It provides a good overview of why this book is valuable and timely.

Read it on the Catholica web site.

Be the first to review “Gateway to Renewal” Cancel reply 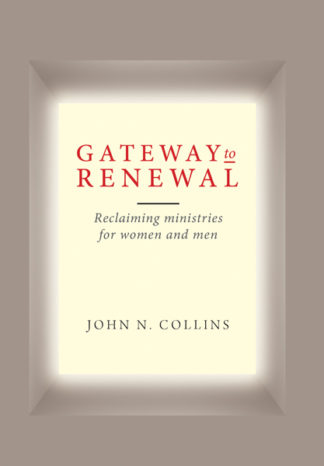 You're viewing: Gateway to Renewal $31.95
Add to basket