View basket “Australians and the Christian God” has been added to your basket.

Snapshots of Congo and the Pygmies of Mubambiro

Don’t Look Away! Snapshots of Congo and the Pygmies of Mubambiro is the story of Australian Barbara Rose Ferguson’s unique experiences in the remote and war-torn African nation, the Democratic Republic of Congo. Over a period of ten years she formed precious relationships with women who had survived unimaginable brutality and found a new passion in life in working for a band of destitute and despised Pygmies. This is an authentic, ‘warts and all’ account from someone who has spent a lifetime working, researching and teaching in the field of international aid on the frontline in two war-torn countries, and eight years in one of the most troubled parts of the world involved with arguably the most disadvantaged people in the world: Pygmies.

Barbara Rose Ferguson was eight years old when she promised to serve God in Africa. She trained as a schoolteacher and later earned her Licentiate in Theology from the Australian College of Theology. Barbara answered a call for teachers to go to work with children in war-ravaged South Vietnam. With the fall of Saigon, she flew to the USA where she completed a master’s degree and a PhD. Returning to Australia in 1986, Barbara worked for 17 years at the University of New South Wales. In her ‘retirement’, Barbara recalled her childhood promise and has made 11 visits to Congo, working as a volunteer in the HEAL Africa Hospital. Her chief concern is for the destitute Pygmies forced from their traditional forest homes by war. Barbara founded and funded the NGO, Pygmy Child Care, which provides a daily meal, health care and educational activities for children in the village of Mubambiro. Barbara was awarded a Medal in the Order of Australia in 2004.

2 reviews for Don’t Look Away! 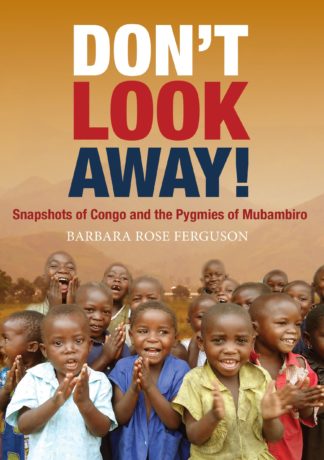