A Story Worth Telling

William McClemans made a lasting contribution to the state of Western Australia through his work as a parish priest and in helping establish St Hilda’s Anglican School for Girls, Guilford Grammar School and Christ Church Grammar School. This biography, which traces the threads of triumph and tragedy through this remarkable life, tells of his early life in Ireland, his ministry to various parishes and his contributions to education. It also covers his traumatic service in WWI, his postwar troubles – exacerbated by the Great Depression – and his later life, when he was supported by his wife and family, several of whom have become well-known Western Australian identities.

Ric Barrett-Lennard grew up on a farm in the area near where William McClemans farmed later in his life. Ric has degrees in history (UWA), theology (Oxford University) and a PhD from Macquarie University. He is an Anglican clergyman and has spent his ministry primarily in Perth Diocese. Ric spent twenty years teaching part-time in the theology programme at Murdoch University. He is married to Julie and has two sons.

Be the first to review “A Story Worth Telling” Cancel reply 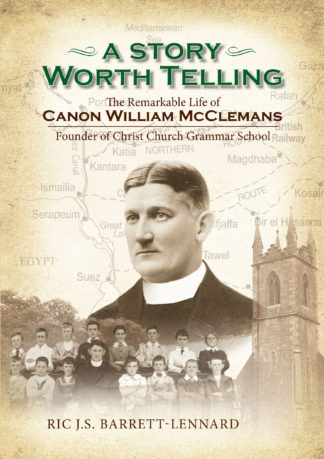 You're viewing: A Story Worth Telling $36.95
Add to basket