A Kind of Retirement

When Archbishop Peter Carnley retired as Anglican Archbishop of Perth in 2005, he embarked on a fresh career, working for various international Anglican agencies and responding to invitations to teach and preach. The fruit of these preaching invitations is now available to all who share an interest in the art of preaching and the theological issues and controversies – especially those concerning sexuality and episcopal leadership – that inform this significant ministry. This is a pleasing collection, offered to the wider Anglican community and beyond, as testimony of life after retirement, however unplanned and unexpected.

Peter Carnley was born in New Lambton, NSW Australia and studied in Melbourne and Cambridge (UK). As Archbishop of Perth (1981-2005), he was the first Anglican bishop in Australia to ordain women to the priesthood. He served as Primate of the Anglican Church of Australia (2000 – 2005) and as a ‘trouble-shooter’ on behalf of the Archbishop of Canterbury, and as Anglican Co-Chair of the Anglican-Roman Catholic International Commission. He is married to Ann and they have two adult children and four grandchildren.

Be the first to review “A Kind of Retirement” Cancel reply 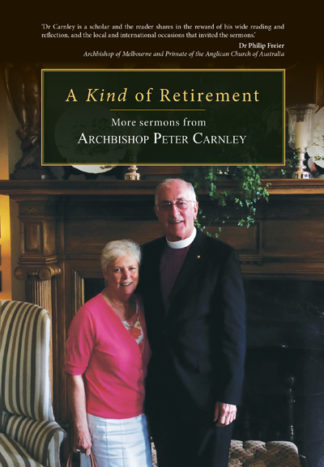 You're viewing: A Kind of Retirement $36.95
Add to basket