When Progressives Gather Together

Liturgy, Lectionary, Landscape… And other explorations

Liturgy has lost its living roots in the soil of the world and become a pot-plant in the sanctuary of the Church, so claimed John ‘Honest to God’ Robinson 50 years ago. Now that claim is being repeated by Australian liturgist and religious naturalist Rex A. E. Hunt. In this eagerly awaited collection of reflective chapters and liturgical resources, Rex Hunt offers broad insights into the shaping of progressive liturgy and worship. Drawing on more than forty years of ordained ministry, he peels back some of the traditions behind Liturgy, Holy Communion, Baptism, the Lord’s Prayer, and Preaching, and suggests when these are and continue to be, reshaped and reconstructed by both progressive theology and critical biblical studies. Then he offers a wide collection of actual liturgies and liturgical resources. Progressive orthopraxy rather than traditional orthodoxy!

Rex Hunt is a retired minister of the Uniting Church in Australia, where he served in several congregational settings, as well as nine years as Director of Communications with the National Assembly of the Church. His commitment to the progressive religion movements in Australia and New Zealand has been expressed in his being Founding Chair of the Planning Team of Common Dreams Conference of Religious Progressives, Australia/South Pacific for seven years, and as an Associate of the Westar Institute, when for three years (2005-08) he was a member of its Literacy & Liturgy Seminar.

Be the first to review “When Progressives Gather Together” 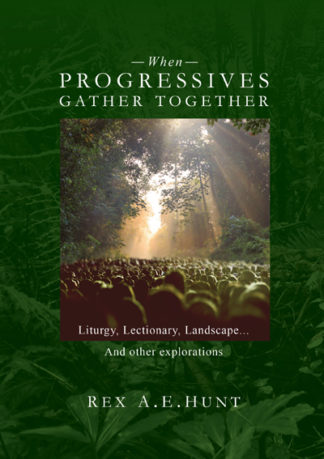 You're viewing: When Progressives Gather Together $31.95
Add to basket